The Woman Who Started it All 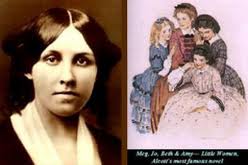 Louisa May Alcott is credited as being one of the first writers to write books for young adults.  She was born November 29, 1832 in Massachusetts, in a time where many women didn't have public images.  So what was so special about Louisa that she could create such a reputation for herself?

Louisa lived in Concord, Massachusetts with her family.  Her father was a teacher and a member of the Trancendental Club.  He taught Louisa and her sisters to read and write.  His fellow club members, especially Ralph Waldo Emerson and Henry David Thoreau, also worked with the girls to help them become better thinkers.  Many of their family friends, like Nathaniel Hawthorne and Margaret Fuller, were established writers.  Because of their unique interactions with these famous friends, the entire Alcott family was raised to think and write, even though such activities were not usually encouraged by society for women.

By Louisa's young adulthood, the Alcott family was financially struggling.  She immediately started working in various permitted jobs to help out her family.  She started out as a governess and seamstress, two socially acceptable positions for women, but quickly turned to writing.  Louisa wrote regularly for Atlantic Monthly, and wrote frequent "blood-and-thunder" stories.  She wrote these under the pen name A.M. Barnard.  Many women writing in this time wrote under pen names.

Louisa made enough money from her writing to nicely support her family.  She then started working on a book for younger readers.  In the mid 1800s, young adult literature was a new field.  Many books existed for young boys, but the literature designed for girls was seriously lacking in detail and description.  Louisa changed all that for girl readers.  She recognized that girls also deserved to have access to good books that would interest them.  She started writing her most famous book, Little Women, to satisfy this need for good books for girls.  The novel was loosely based on her childhood experiences with her sisters.  Of the four sisters in the novel, Louisa is most similar to Jo, though Louisa never married in real life.  The book was published in parts in Atlantic Monthly and later re-published in its novel form.

When her sister died, Louisa took in her young daughter, Lulu, and raised her as her own child.  Louisa continued to write to support her family until her death in 1888 from mercury poisoning as a result of her Civil War nursing.  Her home in Massachusetts has been turned into a museum, which you can visit today.  For more information, see their website:  www.louisamayalcott.org/‎