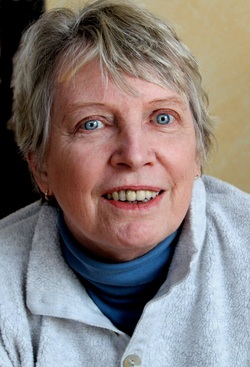 Lois Lowry is a common name on both public school library shelves and on banned books lists.  My first experience with her was being told that I couldn't read her book, The Giver, in fifth grade because I was a twin and "bad things happen" to twins in her book.  Lois has also won two Newbery Medals, cementing her place in adolescent literature.  So how does a woman so contested win two such prestigious awards?

Lois was born in Honolulu, Hawaii to a navy family.  Her dad was a navy dentist and his job moved the family around a lot.  Lois and her family even spent her middle school years in an American school in Japan after World War II. Craving some stability in housing, Lois enrolled at Brown University to earn an English degree.  Unfortunately, such stability was not meant to be.  When she was only nineteen years old, after two years of school, she married Donald Lowry.  Donald was a US Naval Officer and his job, much like her father's, kept her moving around.  They started a family, and Lois soon found herself surrounded by four children.

Once the family finally settled down in Maine, Lois was able to finish her degree at the University of Maine.  She began writing as a freelance journalist for different women's magazines.  After much publicity through Redbook, the publisher Houghton Mifflin asked her to write a children's book.  Around the same time, when Lois was 28, her older sister died.  Lois turned the tragedy into her first novel, A Summer to Die.  The book sold well, but many parents and teachers objected to the novel, fearing the content (death of the main character's sister) was too difficult for kids to read about.

And so began both Lois's writing successes and her opposition.  In 1990, Lois published her first award-winning novel, Number the Stars.  This controversial novel tells the story of a brave Jewish girl trying to escape the Nazis in Germany during the height of World War II.  Some of her family members die, and much of the action can frighten readers, or so many parents claimed.  The book, despite complaints from parents and teachers, went on to win the Newbery Medal for the year.

Lois's next novel, The Giver, was no less controversial.  In this novel of dystopian society, a little boy is selected as the next Receiver.  In this society, all memories of the past and all knowledge of history are kept only in the head of one man, the Receiver.  This society is left so drab that the people doesn't even see in color, just in shades of gray.  The young, newly-appointed Receiver plans, with the help of the old Receiver (whom they have decided to re-name "The Giver") to restore these memories to their people.  Parents often object to the material in this novel, either because of the "releasing" of babies, or the simple nature of the dystopia itself.  The Giver won the Newbery Medal in 1994 and is still found on banned books lists and required school reading lists alike.

The intense controversy surrounding The Giver both secured its fame and inspired three companions.  The first, Gathering Blue, is about another dystopian society where a little girl is hired to repair an important robe, but without blue threads, since the dye cannot be found.  In the process of discovering the dye, she meets other children who are taken advantage of for their artistic gifts.  The next book, The Messenger, is more of a sequel to both books.  The children from the previous two books, along with many more, start their own society in the woods.  Over the years, the woods grow more and more harsh against those who travel there.  This book is about Matty's search for his true name as he makes a perilous trek through the forest.  The last book in the series, Son, is much longer than the rest and nicely ties them all together.  This book tells the story of Gabe's mother as she tries to cope with what it means to be a birth mother, and how to live in her society after Jonas takes Gabe and leaves, forcing all the memories on the town.  While this story really begins a different view of everything in The Giver, it goes on to follow an obviously tortured woman as she gives up everything to find her son.

Despite her appearances on banned books lists, or perhaps because of them, Lois will long have a place on library bookshelves and in classroom discussions.