The Queen of Science Fiction 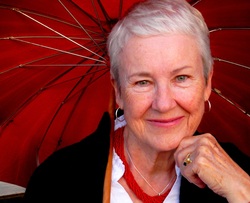 Madeline L'Engle Camp wasn't a very good student.  She found school boring, and spent her time telling herself stories instead.  She got the habit from her father, the famous writer Charles Camp, who wrote short stories, plays, and movies.  She was such a poor student, in fact, that when she won her school's poetry contest, her teachers accused her of plagiarism. How did Madeline get into that situation, and how did she then become an award-winning author?

Madeline was born in New York City to a very social family.  Her parents loved to give parties in their Central Park apartment.  Because they entertained so much, they hired a nanny to take care of young Madeline.  Both her nanny and her mother read to her every day.  It was one of her favorite parts of the day.  Madeline even made up some of her own stories.  When she was only five, she illustrated her first story.

When she was old enough to go to school, her parents sent her to private boarding schools.  Madeline was miserable there and had a hard time making friends.  She eased her fears and unhappiness by writing.  Madeline also found her schoolwork boring.  Rather than do her homework, she wrote fantasy stories where she could be the heroine.  Understandably, her grades suffered, and her teachers thought she was unable to do well.  In the sixth grade, Madeline entered her school's poetry contest and won.  Her principal immediately stripped her of the prize, however, believing she had copied the poem.  Madeline's outraged mother had to bring in armfuls of Madeline's stories to prove her daughter's talent.  Madeline was re-awarded the prize.

By high school, Madeline had already been to many different boarding schools.  She spent her last four years in Ashley Hall Boarding School in Charleston, South Carolina, and it was here that she was truly happy for the first time.  Madeline published many poems in the school literary magazine and went on to become editor of the publication in her senior year.  Unfortunately for Madeline, this year of professional success also brought personal tragedy:  her father died before she graduated.  His death changed the way she wrote.  Instead of writing fantasy stories with herself as the heroine, she started writing realistic stories about the world as she saw it.

Madeline enrolled in Smith College in Massachusetts as an English major.  Her experiences with the literary magazine in her high school led her to start a similar publication at Smith.  She continued to publish her poetry there and went on to win the prestigious Elizabeth Babcock Poetry Prize of $2,500.  Madeline also used this time to write plays and learn all she could about the theater.

After she graduated with honors, she moved back to New York City to pursue acting.  She landed several small roles and understudy parts.  Madeline loved the theater, and earned free tickets to as many shows as she could by selling war bonds in the theater lobbies before and after plays.  Madeline also worked on her writing during this time.  She decided to drop her famous father's last name, Camp, so her work would be judged on her own merit rather than her father's name.  She quickly published her first novel, The Small Rain, in 1945.

In January 1946, Madeline married fellow actor Hugh Fanklin.  They bought and renovated an old farmhouse in Connecticut, which Madeline named Crosswicks, to live in during the summer months.  In the winter, the couple lived in New York so Hugh could act.  The couple very quickly had two children and then adopted the young daughter of friends who'd died unexpectedly.  Madeline found herself overwhelmed with three children under the age of five.  To help her cope, she adopted a strict writing schedule. She wrote every night after the kids went to bed.

While on a camping trip with her young family, Madeline had a dream about a Mrs. Who, Mrs. Whatsit, and Mrs. Which.  These three women, along with Crosswicks as a setting, quickly turned from dream to novel, and A Wrinkle in Time was born.  Madeline's Christian background appears throughout the work, and she knew it was good, but wasn't prepared for the amount of success the book garnered.  As soon as it hit the shelves, the awards started coming in.  The novel won the Newbery Medal that year, along with the American Library Association's Notable Book Award, the Lewis Carroll Shelf Award, the Sequoyah Award, and was the runner up for the Hans Christian Andersen Award.  The book was so successful that she returned to the characters to write several more books, including A Wind in the Door, Many Waters, A Swiftly Turning Planet, and the entire Meet the Austins series.

Madeline continued to write for the rest of her life.  She published more than sixty books for young adults while serving as a goodwill ambassador to both Egypt and China.  She taught writing classes at the private school her children once attended until her death.  Madeline is remembered as one of the great writers in the field of science fiction for young adults.