Getting an Early Start 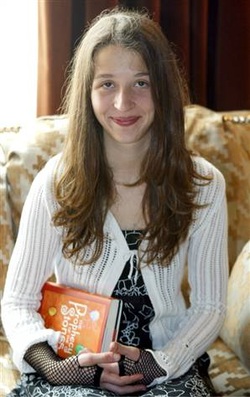 Flavia Bujor appears to be a typical high school student.  She has a core group of friends at school whom she hangs out with between classes and at lunch.  She attends club meetings after school before heading home to do homework and read books.  She has dinner with her parents before hanging out with friends and going to bed.  But she isn't as typical as she seems.

So what's so special about her?  When Flavia was only twelve years old, she wrote her first novel, which was published in France when she was thirteen. Her book, The Prophecy of the Stones, was very successful, and went on to be translated and sold in 24 countries.  It's the story of a young girl who is hospitalized and dreams of another world where three young heroines must band together to save their land with nothing but one another and a few magic stones.

Flavia was no stranger to stories.  As a young child, Flavia's parents read her Shakespeare's plays and celebrated their Romanian heritage with traditional Romanian fairy tales.  She loved books and begged her parents to read to hear as much as they could.  She could read on her own before she started school and read everything she could get her hands on.

She also told her own stories to anyone who'd listen.  Her stuffed animals, parents, and friends were constantly regaled with the latest adventures she thought up.  Most of her stories, however, didn't have an ending.  Usually, she'd just invent a new story and move on without finishing the last one.

Frustrated, Flavia challenged herself to invent a story and finish telling it, just to see if she could really do it.  The result?  Her first novel was accepted for publication.  While on her book tour, she told reporters that she wanted to keep writing but didn't want to write another fantasy book.  Flavia is always up for a new challenge, and encourages other kids to do the same.  After all, she says, you never know what may happen.