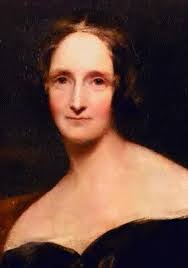 Children everywhere are familiar with Frankenstein.  He makes an appearance every year at Halloween in costumes, stickers, fake tattoos, and cartoons, among countless other things.  What many children don't know is that Frankenstein comes from the greatest horror story of all time.

Mary Shelley wrote her novel Frankenstein when she was only 18 years old.  Mary was with her husband, Percy Shelley, and their friend Lord Byron when Lord Byron challenged all three to a ghost story contest.  Mary had a nightmare and wrote down the details of her dream.  The story she told from that dream won the contest and was later converted into her novel, published in 1818.

The novel was published anonymously as Frankenstein:  Or, the Modern Prometheius.  Several critics assumed the book was actually written by her husband, Percy Shelley.  Mary soon wrote to all their family friends to convince them otherwise, and all later editions of the book were published with her name.  Some critics still claim that Mary couldn't have written the book, but that view has been largely discredited.

Much like other women of that era, Mary came from "special" circumstances.  Her mother was Mary Wolstoncraft, a famous feminist, and her father was also a writer.  While Wolstoncraft died giving birth to Mary Shelley, Mary still knew and read everything her mother wrote to get an idea of what her mother had been like.  Mary's social circle was filled with other writers, like Percy Shelley and Lord Byron.  It comes as no surprise then that Mary wrote so well.  She read everything she could, which showed in her writing.

Frankenstein was well-received for the ethical issues it raises.  But it didn't become such a cultural icon until the film industry.  For decades, the movie industry made many different film adaptations of Mary's story.  The 1930s version gave us the image we now picture when we think of Frankenstein, and helped solidify the reputation of Frankenstein referring to the unnamed monster rather than the doctor who created him.