Across the Generations:  More Than 50 Years with Beverly Cleary 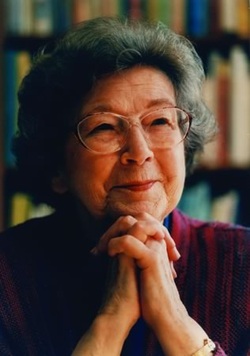 Beverly Cleary is one of the most prolific children's authors, most well-known for her Ramona books and her award-winning Dear Mr. Henshaw.  Over her career, she's written more than seventy books.

Beverly absolutely hated reading on her own as a child.  Her main complaints were that the books available to her weren't about ordinary kids like her, and there wasn't enough action.  She found descriptions so boring that she would often throw books across the room in frustration.

While she hated reading on her own, Beverly loved listening to stories.  Because she was an only child, her mother would often read to her on their small Oregon farm.  Her favorites were Mother Goose and The Story of the Three Bears.  Beverly heard these stories so often, she memorized them.

When she was six, Beverly and her family moved to Portland, so her father could work in banking.  She started school then, but Beverly disliked her teachers.  She struggled to read, and her teachers were often harsh on her for her weaknesses.  As a result, she refused to read at all unless she was forced to do so in the classroom.

Thankfully, more supportive teachers in her later years, along with support from her mother, got to be a better reader.  Once she didn't have s, to much trouble reading, she found respite in libraries.  Beverly soon spent all her free time in the library because her parents were too poor to buy her books.

She started writing in middle school, and her work was very well-received by her teachers.  She won a state-wide essay contest on their state mammal, the beaver.  Her teachers encouraged her to keep writing because she wrote such promising school essays.  By high school, she had her first story published in the high school paper.

Unfortunately, this was the time of the Great Depression, and both of Beverly's parents were unable to find work.  Beverly dreamed of going to college, but she knew her family couldn't afford it.  Once she graduated, however, she got the opportunity of a lifetime.  Her cousin, who lived in California, invited Beverly to live with her and attend Chaffee Junior College, which was tuition-free.  She jumped at the chance and earned her Associate's degree.  Beverly then went on to earn a Bachelor's from the University of California Berkley and her Masters in Library Sciences from the University of Washington.

In 1940, she married and served as an Army Librarian during World War II.  When she and her husband moved into their first home after the war, she discovered several reams of typing paper left behind by the previous owners.  Beverly told her husband she's write a book if she only had a sharp pencil.  The next day, he brought her several new pencils, and she began writing Henry Higgins.  She sent her completed book to several publishers, and it was accepted and printed in 1950.  Beverly now begins all of her new books on January 2nd, the same day she began working on Henry Higgins.  All her books were about ordinary places.  Many of the events grew up in ordinary places.  Many of the events in her childhood appeared as events in her books.

Beverly wrote so many books, and was so popular, that she received many letters from her young readers.  Some suggested ideas for books, some asked questions, and others simply praised her work.  She turned these letters into her book Dear Mr. Henshaw, published in 1984.  This book won the Newbery Medal the year after, helping to solidify her place in school libraries everywhere.