Against All Adversity:  The Story of One Author's Struggles with Blindness 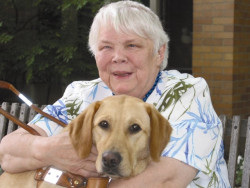 Many children (and adults) are fascinated by Hellen Keller because, despite being both blind and deaf, she overcame everything to be a successful woman.  But Hellen wasn't the only woman to overcome such adversity.  In many ways, Jean Little struggled more and ended up more successful.  She changed the lives of young children with disabilities everywhere.

Jean was born in Taiwan in 1932 to parents that were medical missionaries.  Their joy at having a daughter was soon drowned in concern, however, when they discovered their baby was likely blind.  While Jean could (and did) respond to light, it wasn't until she was four months old that anyone realized she could see at all.

Her eyes were severely damaged.  Jean was born with scars on her corneas, which made her eyes so cloudy that her pupils couldn't be seen.  She also had strabismus, which meant her eyes couldn't focus together on one thing.  If Jean looked at a toy with her right eye, her left one would turn in toward her nose.  To make matters worse, she also had nystagmus, which made her eyes quiver.  To Jean, it made words in books look like they were juggling.

Despite her visual constraints, Jean was a bright, inquisitive child.  She loved listening to stories and constantly asked anyone around her to read to her.  In fact, her first word was "book."  But having family read to her wasn't enough.  Jean was desperate to learn to read on her own.  Eventually, her mother created a special corner of their house for teaching her.  The boards were on wheels with very large, high-contrast print to help Jean see.  Her desk was slanted, which allowed Jean to sit closer to her books.  And so she learned to read.

Once Jean started school, however, it was obvious her visual impairments would make school a challenge.  The other kids teased Jean mercilessly because she was different, and her teachers wouldn't put her desk close enough for her to see the chalkboard.  Jean soon moved to Canada with her mother to attend Toronto Sight-Saving classes for visually impaired children.  The classrooms there were set up like her learning corner had been.  Everything was on wheels for mobility, and all the desks had special slanted surfaces to make reading easier.  Jean flourished in this environment and skipped the first grade.

The next year, the family moved again and Jean went back to regular classes.  She skipped third grade, but found herself in a class full of unfriendly students.  Her only friends were characters in books.  Jean loved reading, but she was frustrated that she couldn't find books about handicapped children like her.  So she decided to write her own stories.

Jean began writing with an adventure story in a notebook when she was ten.  She continued in journals at school in the sixth grade, and went on to compile a book of poetry by the age of fifteen,  Jean was first published in 1949 at the age of 17 in Saturday Night, Toronto's weekly magazine.  She was thrilled.

Always studious, Jean was determined to go on to college, despite her difficulties.  Her father tried to talk her out of it, but Jean insisted and enrolled at Victoria College so she could go on to teach.  She and her father wrote back and forth about her assignments until his death in her sophomore year.

After her graduation, Jean taught at Guelph Crippled Children's Centre.  While she loved working with the kids, she was very frustrated that she still couldn't find books about children like them.  So Jean decided she'd finally write one herself.  That first book, Mine for Keeps, won the Little, Brown Canadian Children's Book Award contest and a prize of $1,000.  After that success, Jean left teaching to pursue writing.

But Jean's vision problems returned.  When she was 30, she developed glaucoma in her left eye.  After three operations, the damage was too great and her eye had to be removed.  For the first time in her life, her new plastic eye made her not appear cross-eyed.  Unfortunately, a few years later Jean developed glaucoma in her right eye as well.  By 1976, she was completely blind.

Jean refused to let her blindness slow her down.  She co-founded CANSCAIP, the Canadian Society of Children's Authors, Illustrators, and Performers to establish a support system for children's artists.  She also published another book she'd written, Listen to the Singing, which won the $5,000 Canada Council Children's Literature Prize.

Total blindness made writing very difficult for Jean.  She had no braille skills, so she had to write in other ways.  She tried using a Dictaphone, but was very frustrated in how slowly it recorded her words and the frequent mistakes it made.  Jean found out about a new computerized system called SAM that would make writing much easier, but it was very expensive.  Friends and family helped raise the money, and she went back to writing.  Jean also got a guide dog named Zephyr to help her get around her home.

Jean's writing was very popular with children.  She was awarded both the Vicky Metcalf Award and the Ruth Schwartz Award for her work.  Through her stories, children have come to see others with disabilities as "normal," just as Jean always hoped they would.