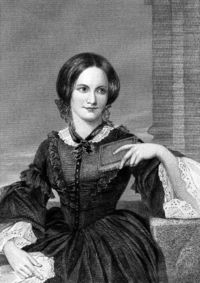 Charlotte Brontë was easily one of the best-known writers of her day. She was also one of the first Victorian writers who put obvious feminist ideas in her fiction. Her most famous work, Jane Eyre, is still widely read, both for fun and in high school or college English classes. The novel has also been credited as the model for hundreds of best-selling love stories. But Charlotte came from the same era as Louisa May Alcott and published under a pen name (Currer Bell) to avoid negative social commentary as a result of being a female writer. So how did Charlotte carve such a niche for herself in English literature?

As was the case with many female writers in the 1800s, Charlotte came from a “special” family. Her father, Patrick Brontë, was an Irish clergyman who wrote several volumes of poetry, a novel, and a collection of his sermons. Charlotte's mother wrote essays. The influence of both parents encouraged all six Brontë children to read and write.

Mrs. Brontë died of cancer shortly after the birth of her last child, leaving Patrick Brontë with six children. The late Mrs. Brontë's sister came to stay with the family to help take care of the children. Aunt Branwell was the polar opposite of the warm woman their mother had been.

Patrick soon sent his four oldest children – Maria, Elizabeth, Charlotte, and Emily – to boarding school at Cowan Bridge. The school was a charitable school for children of poor clergymen. While there, the girls were subject to tyrannical discipline and were poorly fed and housed. As a result, many of the girls fell ill. Before the Brontë family could rescue the children, both Maria and Elizabeth died from a combination of typhoid fever and consumption.

The remaining four children – Charlotte, Emily, Branwell, and Anne – turned to literature for comfort. They transformed their father's parsonage into their own literary community. The four created two imaginary kingdoms, “Angria” and “Gondal,” and wrote stories about their histories. Eventually Charlotte and Branwell wrote just of Angria while Emily and Anne recorded the history of Gondal. In their work, they reproduced the styles and themes of their favorite writers, mostly Sir Walter Scott and Lord Byron. They continued these tales even after Charlotte returned to school.

After Charlotte finished school, she began teaching. But she hated it. Charlotte constantly felt trapped and turned to her stories for escape. She left teaching to become a governess, but the job gave her no relief. She felt she was in “bondage,” but there was little else for a poor, single girl to do. Marriage was a common answer to such problems, but Charlotte refused to marry anyone unless she was in love, so she remained single.

In 1842, Aunt Branwell offered Charlotte and Emily enough money to open a school of their own. They way, they could reman relatively independent without feeling trapped. But this business venture required more education, so both girls left for Pensionnat Hegar, a finishing school for young ladies in Brussels. While there, Charlotte fell in love with M. Hegar, despite the fact that he was a married devout Catholic. He did not return her feelings. At the end of the year, Aunt Branwell died, and the girls returned home. They worked to find pupils for their school, but none enrolled.

Eventually Charlotte turned to her writing to find happiness. Charlotte found some poetry belonging to her sister Emily, and ended up collecting and publishing a book of verse of all three sisters. The book sold two copies, but the writing bug had bitten all three girls. They were not swayed by the failure of their first volume.

Charlotte returned to her own life experiences for her novels. Her first novel, The Professor, tells of her experiences at finishing school in Brussels. Her most famous work, Jane Eyre, memorializes her early school experiences as well as her time spent as a governess. It was this work that launched “Currer Bell” into the world of literary greatness.

But such success and happiness was short lived for poor Charlotte. Soon after Jane Eyre was published, Charlotte's brother Branwell died. Only months later, both Emily and Anne succumbed to tuberculosis. Charlotte kept writing, but was not consoled by her new-found fame. She turned to keeping house for her father.

In a last effort for happiness, she married Arthur Bell Nicholls, her father's curate, in 1854. She soon got pregnant, but was not to enjoy family life. Charlotte suffered from very severe morning sickness, and was completely incapacitated by March of 1855. By the end of the month, she died.

Charlotte lived a life of much tragedy and died young, but her books have far outlasted their author, and likely will continue to do so for generations to come.